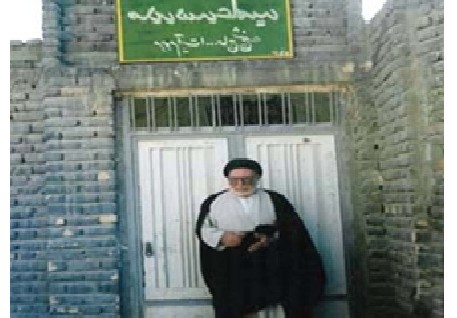 From Birth to Date

Ostad Seyyed Ali Mousavi, the son of Seyyed Hussain Mousavi, was born on the morning of 28 December 1928 in the district of Bornabad near the town of Kashmar.

He was greatly enamoured with the clerical clothing and acquiring knowledge and science from early childhood.

He started school at the age of five, and after six months, he successfully completed a course in recitation of the Holy Quran. Thereafter, he studied a few books including Sad Kalameh (100 words) on the marriage of the daughter of Prophet Muhammad, Hazrat Fatima Zahra (SA), Tufan Al-boka (Thunder of Tears), a eulogy for Imam Hussain (AS) and Tarassol which was an introduction for the students of theology.

At the age of six, he started learning the Jame al-Moqadamat and Sharh Amsaleh with his father. His pilgrimage to Imamzadeh Hamzeh and Seyyed Morteza in Kashmar marked the beginning of his academic endeavour where he enrolled in a theological school, called Ayatollah Haj Sheikh after some preliminary stages. That was the beginning of his theological studies and in fact that of the surging of his knowledge. 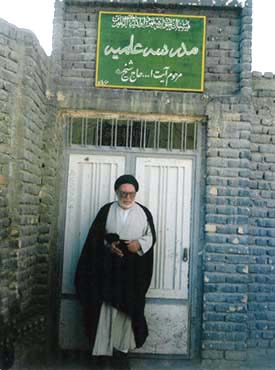 He acquired the preliminaries of Arabic lessons through a devout scientist, the late Fazel Muqany and the preliminaries of religious jurisprudence with the pious personality of those days, Mr. Noor, and Shamsieh and Mantiq (Logic) through an honourable personality named Mr. Ishraq. He studied the books Lo’matein, Ma’alim, Qavanin and Safi Interpretation with a great teacher of theology and devout person who was a true gnostic of his time, the late Sheikh Muhammad Hassan Modarres every day after morning prayers.

During this period of education, as per his father’s strict recommendation, he started learning philosophy with a reputable professor, unique philosopher and great theologian and perfect devotee, the late Sheikh Muhammad Ali Elahi whose wisdom allowed him to live in seclusion but his spiritual illumination was extensive. The total number of years during which Ostad Mousavi studied with the late Sheikh Muhammad Ali Elahi was 21 years.

In addition to philosophy, wisdom and gnosis lessons, Ostad Mousavi studied Makaseb wa Rasael (Faraid al-Usul) of Sheikh Ansari and the two volumes of the Kefayat al-Usul of late Akhoond Khorasany and La'aly and Manzoomeh of Haj Mulla Hadi Sabzevary with Haj Sheikh Muhammad Bagher Emami, an esteemed knowledgeable personality who was one of the most prominent theological figures of those days and one of the disciples of Seyyed Abdul Hassan Esfahani, who undertook the management of the theological schools of Kashmar, and thousands of ordinary and distinguished persons benefited being in his presence.

Ostad Mousavi studied in the theological school under the supervision of different professors for a total of around 24 years. It should also be said that he studied religious jurisprudence (Fiqh) and fundamentals of principles (Usul) with prominent professors for five years and later studied Fiqh and Usul in Mashhad with other professors. 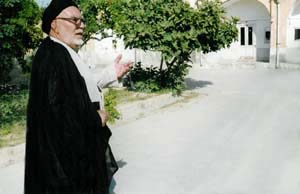 However, what overshadowed all his scientific life was the seven years during which he studied Mulla Sadra’s book, Asfar Arba‘a (The Four Journeys) with devout scientist and theologian, Sheikh Muhammad Ali Elahi.

Thereafter, he studied Manzoomeh, Ishraq, and Tajrid for three years and in addition benefited from his professor’s scientific and gnostic illuminations.

Meanwhile, in order to receive a university certificate, after an examination held in Sepahsalar School of those days and the present Ostad Motahhari School he started studying along with a large number of clergies and obtained his diploma and thereafter took part in the entrance examination to the University for Religious Studies and was accepted.

Ostad Mousavi has been researching for many years using scientific reference books and original documents and his private library. In addition, he has made use of Razavi Library in the holy city of Mashhad for many years and many other famous libraries, such as late Malik’s library in Tehran and Tehran University Library and also manuscripts from the Majlis library and other sources and has presented the outcome of his scientific, philosophical, and gnostic researches to his students.

Here is the best Place for Self Knowledge and Theology.